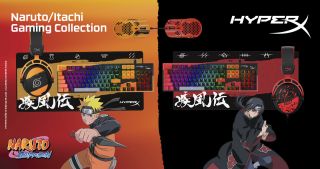 There are two sets, each based on Naruto Uzumaki and Itachi Uchiha, that are styled in their trademark color palette with a bold orange for Naruto and a darker red based on Akatsuki member Itachi. They include a gaming keyboard, gaming mouse, gaming headset, and mousepad.

Does this collection hold up on its own?

While choosing Naruto for one set is a no-brainer due to his main character status, Itachi as the pick for the villainous side is a bit stranger until you remember how his popularity eclipses most of the other bad guy roster.

Regardless, the gaming collection seems to be of high quality as it’s from HyperX’s already great gaming products, which is a rarity among most officially licensed products (just check out our review for the terrible AndaSeat Transformers gaming chair).

And honestly, the designs of the peripherals are pretty solid, accurately reflecting the characters they’re based on while still being genuinely well-designed independent of the property it’s based on.