The 18th century-set prequel gives “Predator” fans the usual goods, from a badass star to tons of gore, but still feels like its own story.

Fans looking for connections between “Prey” and the four “Predator” films that preceded it (not counting a pair of crossover titles from the early aughts) will find plenty to enjoy in Dan Trachtenberg’s prequel. There’s the overt stuff (keep your eyes peeled for a gun that pops up many decades later in the series’ timeline) and the tropes (clever kills that mirror some of the best from John McTiernan’s 1987 film, unexpected heroes of all stripes), but what’s most thrilling about this 18th-century prequel is how much it still manages to feel like its own thing.

Turns out, even the most wrung-out IP — we’re talking about a series that was eventually forced to crossover with another action-centric alien film, to deeply stupid results — can still tap into truly smart new ideas.

Set on the Great Plains in the fall of 1719, “Prey” picks up at a fraught time in American history. The Comanche Nation may still rule this slice of prairie, plains, and forest, but just miles away is a group of money-hungry French fur trappers pillaging their way through the country’s wildlife. Within the tribe, there are other troubles: Young Naru (Amber Midthunder) is desperate to prove her worth as a hunter and warrior, but the group’s male-dominated hierarchy (including her big brother, played by Dakota Beavers in his film debut) isn’t interested in seeing what a girl can do with an axe.

Too bad, because she just might be the only one who can save them.

Midthunder, a longtime actress who is the daughter of actor and stunt performer David Midthunder and casting director Angelique Midthunder, makes for one hell of an action star. That Naru really is a worthy contender and a credible warrior is key to the film and some of its more heavy-handed ideas, and Midthunder makes her bonafides clear from the start. Naru has spent her life picking up key bits of training that others might overlook, including her skills as a tracker and healer that she inherited from her own mother. A discarded axe is her weapon of choice, and while others might sniff at its outdated style, it (and Naru) can do some serious damage. 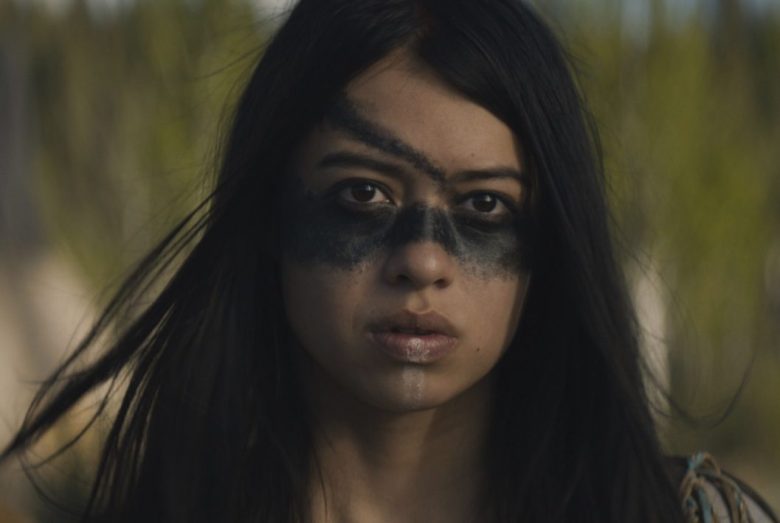 It’s Naru who first realizes that something is amiss, looking to the sky while the rest of her tribe remains fixated on their everyday lives. When a fellow Comanche goes missing with only his blood left behind, her brother Taabe and his friends only consider known predators like a cougar or mountain lion. It never occurs to them that a creature they’ve never encountered before — like an alien being, or even a bunch of vicious fur trappers — could be responsible for wounds they’ve never seen before. Naru is prone to more expansive thinking; soon, she sets out on a mission to warn her beloved brother of what’s really out there, and perhaps defeat the damn thing on her own.

What follows is a thrilling journey in which Naru and her beloved dog (offering a truly incredible canine performance) cut their way through the plains, steadily realizing what they’re up against. The Predator, now a decades-old cinematic star, appears in his usual guise, from lightly shimmering see-through camouflage to his truly terrifying full-color, weapons-laden, definitely alien visage. (Does this Predator kill? Oh, boy, does he.) While Trachtenberg’s film will only stream on Hulu, the filmmaker hasn’t skimped: “Prey” looks great, and would likely look even better on the big screen. After the disappointment of Shane Black’s 2018 “The Predator,” “Prey” ably proves how much more life there is in this franchise, sequel or prequel, big screen or small.

Despite a slower start — though there are pleasures to be found in getting to know Naru and the rest of the all-Native cast — once “Prey” kicks into high gear, it does not let up. Major set pieces abound, including a heart-stopping sequence in which Naru finally witnesses the Predator in all his horrifying glory (the alien warrior takes on a massive, very angry bear, to stunning results) to one in which Naru must use her wits to pull herself out of quicksand. Jeff Cutter’s cinematography, including a number of eye-popping overhead shots, moves between the graceful (a scene in which we see the trappers’ handiwork with a herd of buffalo is absolutely chilling) and the suspenseful (a last-act battle set in the trappers’ camp is made even more freaky by the use of smoke and fog).

The key to “Prey” is screenwriter Patrick Aison’s smart interpretation of its table-turning title: this one is about the Predator as much as it is about his seeming prey, someone used to being counted out who actually offers the biggest danger to the alien baddie. When Naru realizes that the Predator doesn’t view her as a threat — either because she’s a woman (the “yasss queen” tone that runs through the film toggles between smart and heavy-handed, often in the same scene) or because he typically sees her when she’s weapon-less — she uses that insight to her advantage.

How can even the most skilled Comanche warriors battle a massive alien being with a full arsenal of advanced technology? Now that’s how you orient a prequel. How Trachtenberg, Aison, and Midthunder interrogate that very question is a thrill, offering the most unexpected of movie treats: a once-stalled franchise that suddenly seems bursting with delights — and, yes, plenty of blood spatter.

Sign Up: Stay on top of the latest breaking film and TV news! Sign up for our Email Newsletters here.

Marvel Movie Multiples: 20 Actors Who Have Played More Than One Marvel Character

HBO’s The Last Of Us: Season 2 Conversations Are Already Happening