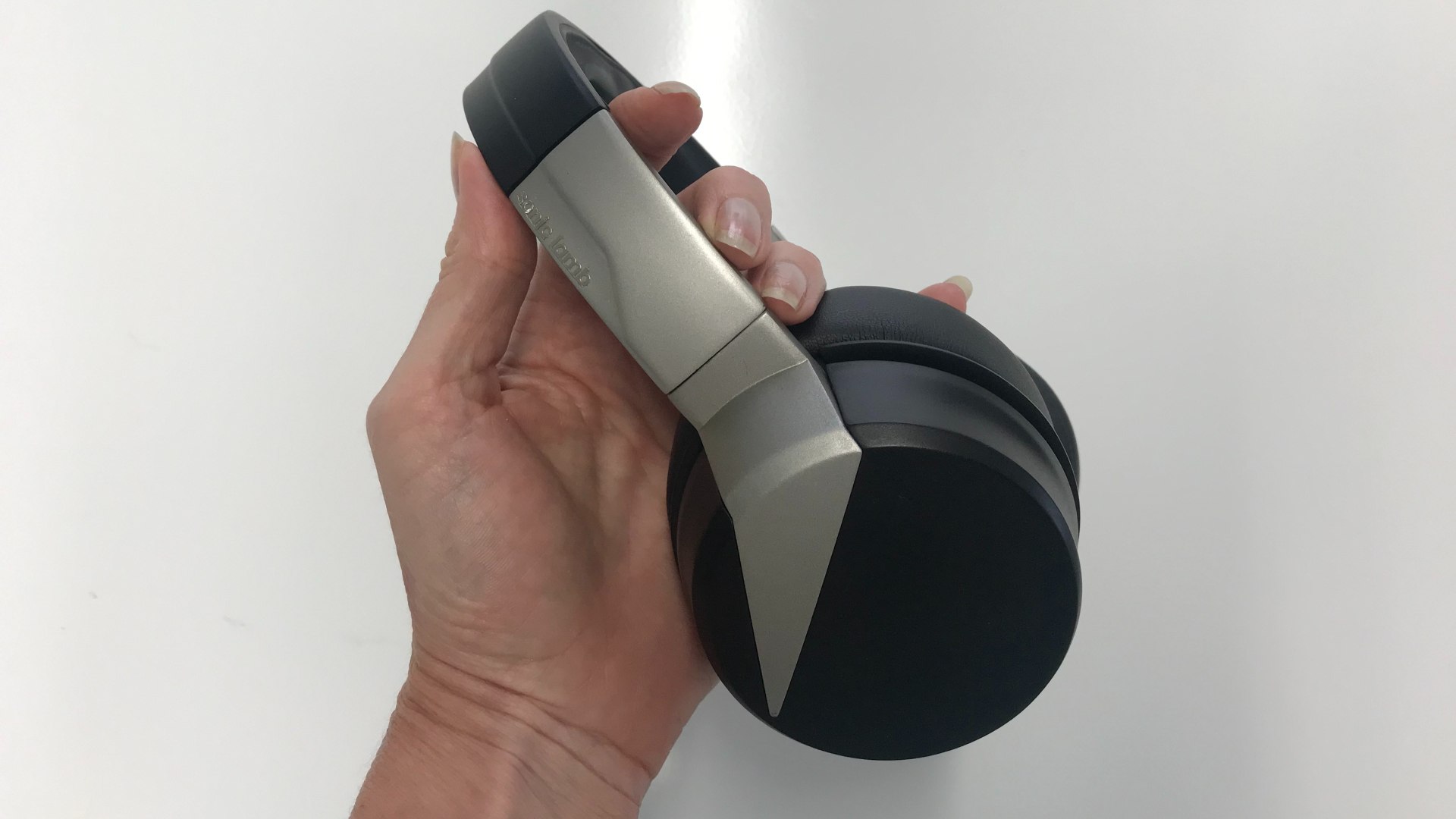 Any audio startup issuing the headline, “Our promise of Eargasm” in its reviewers’ guide isn’t afraid of coming off more than a little, er, eager to please…

But this is nothing if not a new and forward-thinking headphone proposition. The duo that fashioned these cans hold those who have experienced hearing loss close to their hearts too, and I have to confess that having strapped one of only four sets of these Sonic Lamb prototype wireless over-ears on, just to see what happens, I’m a big fan.

I had some negative preconceptions about the tech: it’d buzz, it’d lag, the sound would bloat, wearing them would hurt over time, it would be gimmicky, it just wouldn’t work. None of these things is true. It’s actually quite a subtle performance and one I’ve been listening to happily for several days now.

The concept? In a nutshell (if you need an in-depth explanation, we’ve covered that too), humans don’t just hear through our ears; we also feel sound through our body. Human hearing is tuned to higher frequencies – a twig snapping in the woods – and is far less sensitive to low (bass) frequencies. Thus, we tend to feel sub-bass and bass frequencies more than we hear them (thunder, rumbles in jungles, etc.).

Loudspeaker and home-theater manufacturers use multiple audio drivers dedicated for each audio spectrum to reproduce such an audio experience, plus a subwoofer unit dedicated to low frequency audio – the kind we can feel. But in even the best headphones, the experience is compromised because of the general use of a single audio driver on each side of our head and the lack of specialized audio tech to emulate a subwoofer.

Sonic Lamb changes that. It incorporates a regular full-range audio driver to reproduce mids and high frequencies as sound waves (ie. traditionally, through the air), plus a proprietary driver that – and this is the mad bit – converts the audio signal into corresponding mechanical impulses, thus transforming the earpads into a virtual diaphragm.

This mechanical impulse is transferred from the earpads to the listeners skin and bone and lo! You’re actually feeling the music.

Hold them in your hands as music plays and you’ll feel the difference between these wireless headphones and the Sony WH-1000XM5, for example (and, in fact, practically any of the best over-ear headphones in our buying guide) because there is a vibrational effect which you can feel, but once they’re over your ears, they’re not about to shimmy off to the back of your crown.

And they recreate the experience of being at a live gig much better than I could’ve imagined. Unlike Woojer for example, which sits on your chest or belt buckle, these impulses are sent from around your ears, too, which helps.

Opinion: Sonic Lamb over-ears are better than this sensationalist marketing

I hesitated when writing the above sub-heading, because of course, in the sea of emails I receive each day, the concept of an eargasm stood out enough for me to click on what, let’s face it, was otherwise just another set of over-ears now live on Indiegogo. So, I applaud the audacity.

That said, they’re better than a titillating headline.

OK, the design feels a little unrefined in terms of the buttons and the dial which currently scrolls through the levels of low-end vibration you’ll receive (choose between hear, feel, immerse and beast – I actually enjoy beast the most) is a little chonky, but the basics are bang on. Comfort, weight, well-padded ear cups and the general sound quality are good – and my thoughts on the new, haptic-style concept are resoundingly positive. Simply put, I didn’t expect to feel good about this kind of sound, but I do.

If you’re able to get your hands on a pair, listen to the constant walking bass in Fat Freddy’s Drop’s Wandering Eye for the full nine minutes and 50 seconds. Hear how the flute passages, guitars, backing vocals and tambourines are still crisp and impactful as Dallas Tamaira’s silky vocal taken center stage. It’s good isn’t it? Different, but good.

So do they, uh, deliver that promised eargasm? Well, Sonic Lamb explains that maybe that’s not quite what they meant – if you were thinking what I was thinking there. “Eargasm according to us is the ultimate listening experience and pleasure to the ears” the company writes.

“We believe this is possible when we create the perfect conduit between people and music. Sound is not just heard but also a part of it is felt and perceived by our body and we intend to reproduce that experience as well. Eargasm is our hallmark of commitment to relentlessly develop audio solutions that deliver nothing short of an orgasm of ears. Eargasm to us is not sensual but it stems from many life experiences like euphoria and nostalgia. Eargasm is not just top-notch audio quality but also the impact and influence of getting lost in music and the way this connection transforms, heals, motivates and gives immense pleasure.”

Yes, Sonic Lamb achieves all of that. Is the audible bass compromised? Maybe just a touch; but therein lies its beauty. We have become accustomed to a different, engineered kind of listening using headphones, and it isn’t wrong to consider changing our perception of ‘good’ and ‘bad’ bass representation – a different recipe with added feels, if you like.

You’re certainly not missing the natural feeling of bass, and I may well try to ensnare a listener with a degree of hearing loss to test them for me, to garner the extent to which they agree. I’ve certainly worked with two almost totally deaf professional dancers who were more than able to dance in time to a beat – they simply felt the vibrations of sound coming at them from everything around us, and they moved beautifully.

Sonic Lamb are a talented and detailed set of headphones aside from all the new-fangled tech integration, with separation, finesse and energy when playing grime tunes from Stormzy, Dave and Lethal Bizzle – because of course I was going to see how far I could push them.

Intrigued? You should be. Search for them on Indiegogo…

Arizona officials who planned to help overturn the election in favor of Trump worried that activating a group of fake electors ‘could appear treasonous’: report