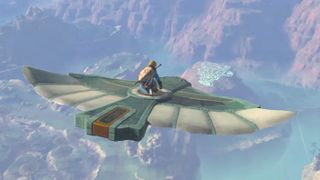 Nintendo has announced a release date and a new title for the sequel to The Legend of Zelda: Breath of the Wild.

The announcement was made in a fresh trailer. Watch it below for a glimpse of Link falling through the air.

We’re not much wiser about what the game will involve after this short trailer. Showing a series of wooden carvings, it gives us a few glimpses of Link falling through the clouds, riding what looks like a levitating platform, and flying through the air. Of course, there’s also the necessary portion of cliff climbing.

But it’s been a long time since we heard anything concrete about the sequel to Breath of the Wild. Originally announced at E3 2019, we had to wait another two years before catching a second glimpse of Link’s upcoming adventure. The latest detail we heard was confirmation that the game had been delayed to launch in 2023. Now, we know exactly when it will launch next year.

With Breath of the Wild considered one of the best Nintendo Switch games around, expectations for this coming sequel are high. We expect to hear more details and see a dedicated gameplay trailer in another Nintendo Direct closer to launch.